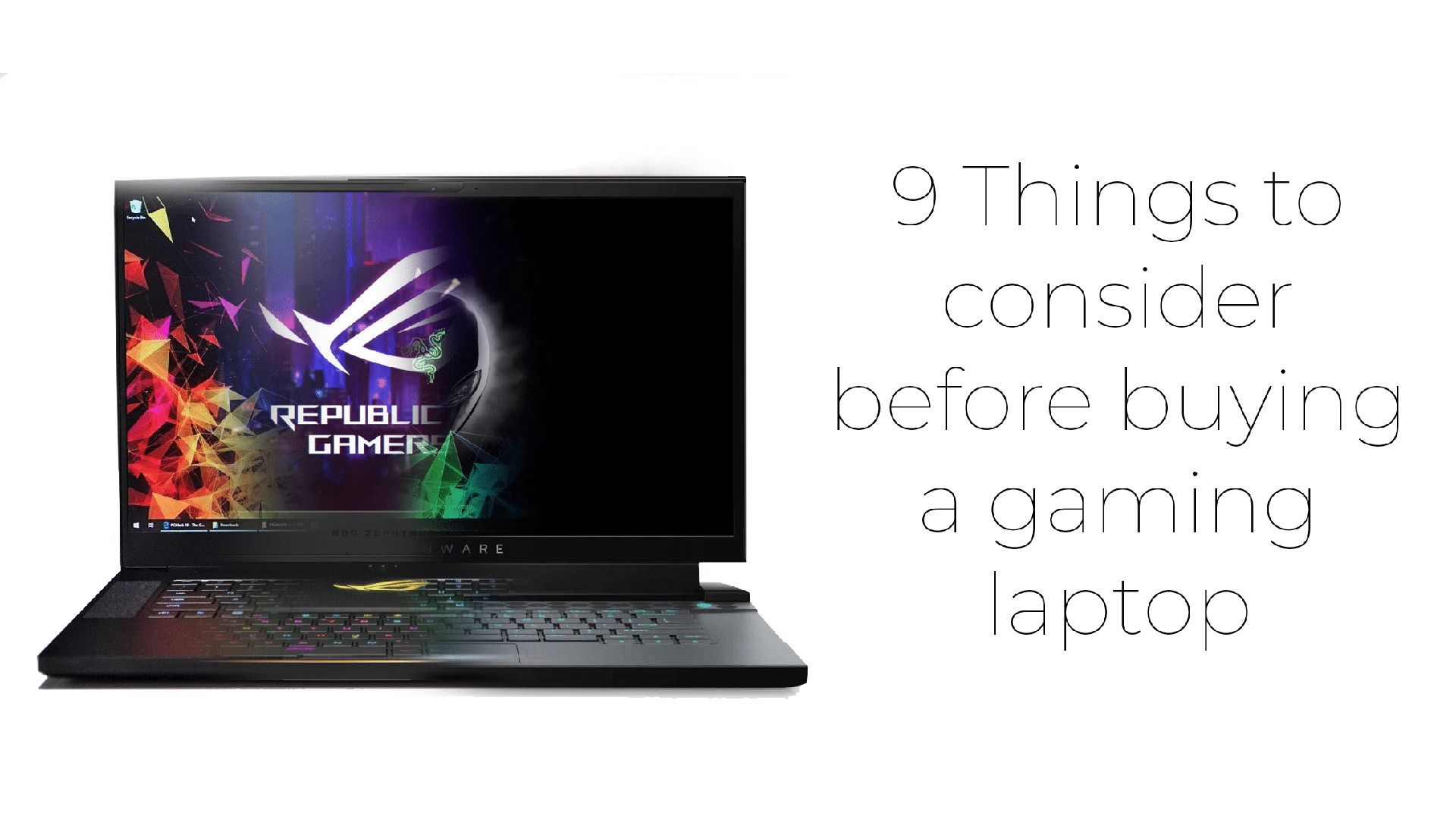 All electronics are subject to entropy despite the finest of care. Laptops are no exception. It weakens with time and a new one eventually becomes necessary. Read these 9 things to consider before buying a gaming laptop.

There is a laptop for any combination of tasks and price points. Near identical specs and great deals online can only exacerbate the challenge of choosing your next machine. We can simplify that. This article assumes you fellow aged gamers know what you want your laptop to do and how much you’re willing to spend.

1. Understand how long the battery will actually last

When a laptop’s battery life is advertised as being able to outlast the sun, it usually means they left it powered on at medium brightness to do nothing but drain. Bypass that by consulting some real-world battery tests like these to know how much life a laptop actually offers.

According to the Federal Aviation Administration (FAA), up to 99Wh (Watt-hours) is the strongest battery they’ll let onto a plane. There are other caveats and add-ons you can read about here, but that’s precisely why laptops don’t have batteries bigger than 99Wh.

Battery life is mostly consumed by the CPU, GPU, and the stealth leech, the monitor. If you have a 240Hz 500nit G-Sync/Freesync display powered by a 10th Gen Core i9 and an RTX 2080 with an RGB keyboard, your battery has the life expectancy of a random NPC trying to rob your Level 81 character in Skyrim (I look forward to a day when this finally becomes a dated reference).

Despite having ~60Wh batteries, the likes of a Lenovo Yoga, Alienware, or Dell XPS could give you upwards of 7 hours of actual battery life. While something with a 99Wh battery like an ASUS ROG or the maxed out Alienware will do you a solid favor if they survive a full hour.

2. Know how much processing power you really need

With every advancing CPU generation, your CPU becomes smaller and smaller, which means they consume fewer watts to deliver greater performance.

Gaming, for all its bravado, isn’t as CPU intensive as it is advertised to be.

While it is nice to have something on your lap that could have powered the entire planet 40 years ago. If all you do is play some games and stream some content, a 12-core CPU might just be overdoing it a little.

CPU benchmarks will tell you what kind of loads capable of withstanding. It cannot tell you just how much power you’re actually going to need. Obviously the companies making them want you to think that the last version is literal garbage as soon as the next one comes out, but realistically, anything within a 3-generation range is going to be enough processing power.

That said if you’re playing a game on a virtual machine while waiting for a render to finish, then you’ll need all the power you can get in there. Peak it out, by all means.

3. GPUs can be overkill

You could very well play Arkham Knight at 640×480 @ 20fps on an Intel Iris 6100 onboard GPU – which is exactly what I did on a Macbook Pro with Bootcamp (felt like I was watching a 2mb image load on a dial-up) – or you could enjoy it in 4k@200+ fps on an RTX 2080 (laptop). The ability to pull that off rests entirely on the shoulders of your GPU.

The more powerful it gets, the better it will need to be cooled (affects the chassis). It will consume more power (affects battery life) and give off more heat and noise (affects ease-of-use). GPU selection is all about finding a good GPU that will meet your needs for the foreseeable future. E.g. an RTX 2070 Max-Q will likely be perfectly suitable for the average gamer’s need for a good 3 years.

If you are running an FHD Display (let’s say @ 144Hz), definitely check the benchmarks for all your GPU options. For example, it could just turn out that for your intended resolution, an Nvidia GTX 1660 Ti, RTX 2070 or RTX 2080 might have a performance gap of a measly 10-20 fps (lowest being in the 70’s and highest being 100’s). If that matters to you dearly, then get the best one your budget permits. However, expect the device to be hot and the fans to be loud when gaming. If you do compromise, know the performance won’t deteriorate in a significant way.

Side note: Razer came out with a laptop that features an RTX 5000 Max-Q Quadro GPU. That is for professional uses. Its gaming capabilities will be the same as that of an RTX 2070 or an RTX 2080 Max-Q. That would be like buying a Big Rig truck, just because it has the same horsepower as a Bugatti. We strongly recommend avoiding that route. RTX 2080 is the best gaming GPU money can buy.

4. Displays should be practical

As we said in the battery section, after the GPU, the display will consume whatever is left of your power.

If you are buying a laptop strictly for gaming, we recommend a 15″ 144Hz (or greater) FHD OLED panel. It covers most use-cases.

However, if entertainment or creativity is part of your intended laptop experience, then you’ll want color accuracy (as close as possible to 100% RGB) and maybe even higher resolutions.

Since you will be seated at an arm’s length from your laptop at most times. Realistically, FHD, QHD, and 4k monitors will not drastically differ from one another. Screen size is a matter of choice, 15″ displays are most popular, however, 14″ and 13″ displays really help improve portability without being too tiny. Personally I went from a 13″ Macbook Pro (retina display) for 3 years to a 17″ FHD Alienware. I could tell the loss of image quality but the screen space was enormous. But insignificant in the long run.

Despite touch being a prominent feature these days, we’ve yet to see the presence or lack of that feature make or break a deal. If it’s important to you, expect to pay a little extra, but don’t expect it to have any meaningful impact on your gaming experience. It does make casual usage very convenient, though.

16GB DDR4 (2400MHz) seems to be the global consensus on how much RAM is both needed and plenty for gaming.

Some 13″ ultrathin laptops tend to rely on a slightly slower, but energy-efficient LPDDR3, while 15-inchers use DDR4. DDR4 is also speeding up each year. DDR4 started with a clock speed of 1600MHz, rose to 2133 MHz while reaching 2666MHz. We’ll leave out overclocking for now.

There is a type of RAM called, ECC (Error-Correcting Code) RAM. If your system runs into a problem at runtime, instead of crashing, it can isolate the error rather than BSOD-ing you. That is critical for high-end professional work, but it is almost negligible for gamers. So that shouldn’t be a priority when purchasing RAM.

If you’re going to be running some renders or editing videos, or simulations, etc. you can’t have too much RAM (ECC would be a great idea here). However, 32GB is the most memory they can fit on a DDR4 stick (as of the writing of this article). As most laptops have only 2 RAM slots, 64GB DDR4 is the highest you can go (128GB if the laptop has 4 slots).

Strictly from a gaming perspective, performances between 16GB and 128GB RAM are practically identical.

6. Chassis is a personal choice

Is it easy to service? What’s it made of? Is it good at cooling? What is the port situation? How loud do the fans get under stress? How rigid is it? Will it electrocute you? How much does it weigh?

This is where laptops with near-identical specifications like Lenovo Legion, Alienware, Razer, ASUS Zephyrus, etc. differ in pricing. Some are built entirely out of plastic, some entirely out of aluminum and others rely on a combination of the two.

No online review will substitute a hands-on experience. Handle it to see how it feels in your hands.

Some ultrathin laptops have such efficient cooling that they can support literally any consumer-grade CPU and GPU, like the Razer Pro. The same Razer chooses to solder components like storage and memory right on to the board, making it impossible to upgrade. This helps keep things compact but also risks the whole thing in the event of a catastrophic failure.

Another question you’ll want answered before making a purchase, “how is the device being cooled?” Is it just a series of big fans on a huge chassis optimized for high performance, or is it engineered down to ultrathin proportions to keep a balance between performance and portability (most thin laptops ride that fine line).

7. The keyboard needs to be excellent

About 80% of the keyboards are identical in function. Key travel is important, the feedback is important and how durable it is. Some of the best keyboards are found on Lenovo, Dell XPS, and Alienware m15 R2 machines.

Even if a keyboard feels and looks great, look out for the placement of the following keys

Key travel matters, but in the long run, you adapt to whatever pressure it requires, so it won’t break the deal for you.

If you have to locate those keys every time they’re needed, it will get real old, real quick. Definitely write at least one email on a machine before you buy it.

A laptop can and will break down. When that happens, it takes a huge chunk of your life with it, that you cannot get back unless you get it addressed.

Make sure you are covered under a warranty and that you have access to a warranty claimant where you live. If you have to ship it offshore for repairs, you don’t control the outcome and it might take weeks, even months to get your machine back.

Also, keep an eye out for what the warranty fully covers, you wouldn’t want to get a device that the company disowns the second it leaves their eyesight.

Most gaming companies are very accommodating in the first year, it’s the subsequent time you have to be aware of. Some companies sell you extra years of service, see if that suits your budget because it is better to pay a little extra then risk losing the entire machine.

A laptop is a relatively short-term commitment. If you treat it well and clear of dust and get it professionally serviced every year or so, it should survive long enough for you to see it become obsolete and you can start the entire process over from scratch. 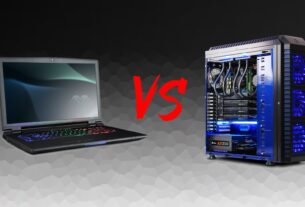