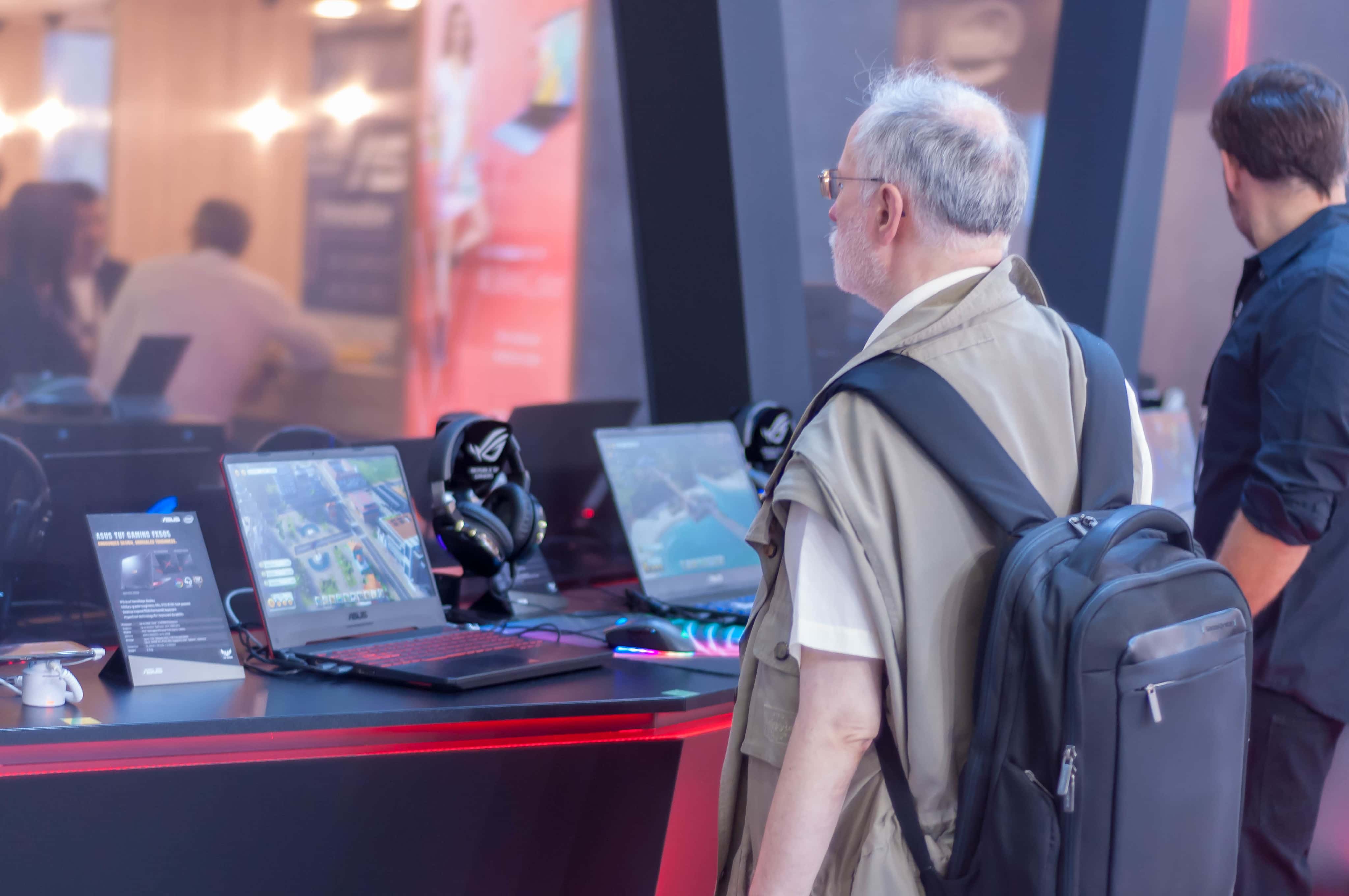 If it weren’t for the degrading body and mind, aging wouldn’t be such a bad thing.

We can hold off this decline by keeping bodies fit and our minds sharp. That’s where gaming comes in.

Senior gamers can be found swiping away for hours on Candy Crush, 8 Ball Pool, Solitaire, Minesweeper, and many like them. This is a fun activity that doesn’t take a physical or mental toll.

That is why gaming can be beneficial for reflexes and synapses in old age, and it’s fun.

We don’t need a research paper to find the correlation between gaming and fun. Now, if our recommendations of 4 best PS4 games for older gamers, or 9 modern classic PC games to play under quarantine don’t do it for you, here are 9 video games for older people to play.

Octordle is Wordle on the hardest mode. You’ve to guess 8 words in parallel within 13 attempts.

Octrodle is built on the same concept as Worlde, where the right guess letter gets a green highlight, and the right letter in the wrong position is colored yellow. An incorrect guess is dark grey. With each guess, you have fewer letters to choose from, until you get the right answer.

Octordle takes one input for all 8 entries, and therein lies the challenge. The chances of getting all 8 right are low, but it is quite satisfying to get them all.

Numberle has the same objective as Wordle. The major difference is you are supposed to try and guess an equation.

There’s another variant named Mathle, but Numbrle is more interesting in our arrogant opinion. Quite a few format clones for Wordle popped up after its runaway success, and Numberle is one of them.

The idea is to work out a basic mathematical equation by guessing the number, the mathematical notation and the answer.

The Apple design award-winning Monument Valley (2014) is a good reason why gaming is considered an art-form. This is the closest humanity will get to experiencing M.C. Escher’s surrealism.

The game requires you to traverse monuments (hence the name), discover hidden paths, and solve each level by manipulating your perspective until a path reveals itself, all the while avoiding the crow people.

While the idea of perspective puzzles has been in circulation since the mid-90’s, it found success as recently as 2012 with FEZ. However, Monument Valley is our recommendation because the artwork and design is extraordinary. The story is surprisingly layered as well.

It is exciting whenever we’re challenged to accurately label a game because the game is more than just one thing.

Device 6 is a novel, it is a text-based puzzle, it is an audio-visual narrative, and it is one of the most innovative games on iOS.

Developed by Simogo, Device 6 is also a 2014 Apple design award winner (good year for innovation). It is the story of Anna. Anna can escape the island she is stuck on by solving various audio-visual, or text-based puzzles littered across the entire game. Your choices branch out into story options, like one of those old choose-your-own-adventure games.

You get to explore the world based on how you react to your environment. The storyline is wonderful, the game is intriguing while requiring no greater effort than reading and scrolling.

Telltale isn’t a single game, it’s an entire genre on its own.

Telltale stumbled across our eyelines with the advent of Tales of Monkey Island in 2009. The original Monkey Island games were point-and-click adventures, that struggled to join modern gaming.

Telltale games changed that by introducing a dynamic RPG-like choice system that lets your story branch out into multiple directions. It could have as little affect as what some character is wearing to changing the very outcome of the game.

Telltale also made episodic releases mainstream for gaming. Each chapter had its own pacing that lent to the rest of the story, while containing its own set of events that end in a cliffhanger.

The formula allowed developers to take more time with the development while also letting the cash flow. Among their most notable releases, Walking Dead and Wolf Among Us were the most critically acclaimed, and quite poignant.

Telltale Games died in 2018 because they oversaturated the market, but they introduced us to quite a few amazing games. All of these games told a brand new story, even with known chracters

This spot was originally occupied by Skyrim, but that does not qualify as advice anymore. It’s like telling someone new to movies to watch The Godfather.

Skyrim is no longer the defacto ruler of the fantasy genre. That mantle has been passed on to Elden Ring after making a quick pitstop at Witcher 3.

Elden Ring is a high-fantasy, open-world role playing game. You pick a starting character and forge your own way to pick up the broken shards of the Elden Ring to become the Elden Lord.

Elden Ring is an extension of Miyzaki’s Soul series where your character is on a quest in “The Lands Between”.

The game is based entirely on how you choose to play. The game offers little handholding as you explore the environment and learn with complete liberty.

Sounds simple enough? YOU FOOL! That’s just what the game wants you to think. You’ll die 10 times in the first 20 minutes of the game alone.

You don’t know where you’re going or what to do next, but it is all part of the building the entire world. You’ll fall in love with it and play for months to come as your Tarnished (main character) goes from being more easily fallible than a dusty leaf to being more powerful than dragons.

Elden Ring is as simple or complex as you want to make it. It might take you a few tries to understand the locale, and you are likely going to die at the hands of a random zombie in a graveyard a few times, but you will get better and better, until the game bends to your will.

Get Elden Ring For Your Platform (Xbox, PlayStation, PC)

In the previous entry, we eliminated Skyrim as an option. Invoking Fallout New Vegas then might be a bit of hypocrisy on our end.

We will risk being hypocritical, as it is important for us to help you consider Fallout New Vegas. New Vegas is a post-apocalyptic Role Playing Game (RPG) where you are a courier trying to survive in the Mojave Wasteland, part of The New California Republic (formerly, Nevada, California, and Arizona) who, upon delivering a poker chip to a man named Benny, is shot and buried.

That’s not a spoiler, that’s literally the opening scene.

The game starts with a doctor who has unearthed you, nursed you back to health, allowing you to either explore or exact revenge as you see fit.

As the story progresses, you learn more about the world you currently inhabit, and uncover a lot of interesting plots. Despite the now dated graphics, you have a promising game you’ll want to experience in all its possible outcomes.

If you don’t gag at the idea of 1st (or 3rd) person camera, and like survivalism, then this is the game for you.

Also, if it helps your decision-making in any way, the character Benny is voiced by Matthew Perry – Chandler from F.R.I.E.N.D.S (I cannot describe how loathsome it was writing it like that).

Do you like numbers? Do you like sliding square blocks into place? That lofty premise is the the only requirement to 2048. Slide numbered tiles by factors of 2 until you reach 2048, or clog the board into a tile jam.

Then, keep going until you add up to 65536 and start over. It is a browser based game so there are no hardware requirements, ads, or ways to spend money on this.

There are thousands of its clones on the market, including a very well designed (another apple design award-winner) Three, that operates on the exact same principles, only on multiples of three.

You don’t even need to be good at arithmetic to pull it off, just a capable tile organizer.

Turn-based strategy games are what you get when you play board games with a computer, and no humans to argue every rule violation with.

If you are of the high-fantasy persuasion, you’re could consider Heroes of Might and Magic, a game we have covered quite extensively in our list of 5 games to make social distancing enjoyable and we encourage you to read more about it there.

However, if you are a history buff but wished global history would have carried out differently, then Civilization is your franchise, and Civ VI is your game. Here Gandhi can declare nuclear war, if you so choose.

This entire site is built as a testament to the destigmatization of gaming as an adult. This is even more beneficial the more you age, and we can’t wait for a senior gaming league.